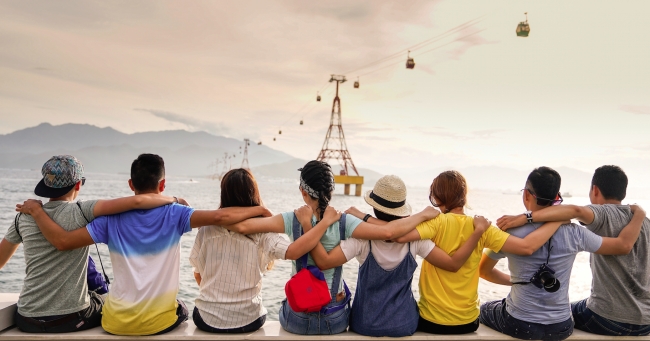 April is Sexual Assault Awareness Month, or SAAM, an opportunity to raise awareness and get involved. DOVE Center is a proud provider of services to survivors of sexual assault in the greater St. George area. Take part in one or more of the following events to commemorate SAAM and show support for survivors.

Take a walk through the exhibit so you can literally see for yourself the insidiousness of the argument that clothing invites or leads to sexual assault. The opening reception begins at 3 p.m. in the Holland Centennial Commons at Dixie State University. The exhibit will be on display there from April 1st through the 12th. It will be moved to the lobby of the Eccles Fine Arts Center for viewing from April 15th to the 19th. There is no fee for admission.

2. Wear TEAL on April 2nd
April 2nd is WEAR TEAL Day. Teal is the color of sexual assault awareness and wearing teal shows you care about consent and respect, and that you believe and support survivors. So find that shirt, scarf, bracelet or socks with a little teal in it and don it proudly!

3. Tune in for a conversation with DOVE advocates
Also on April 2nd, tune in to KDXU 890 AM or 94.9 FM from 9 to 10 a.m. to join DOVE Center advocates in a conversation with host Andy Griffin. We’ll be talking about SAAM and DOVE Center, including the free and confidential services provided by DOVE for those recovering from sexual assault.

4. Take the Start By Believing pledge
On Wednesday, April 3rd, the DSU Police Department is launching its Start By Believing campaign at an open house, also in the Holland building, from 11 a.m. to 1 p.m. Start By Believing is a global campaign working to create positive change in the way we respond to sexual assault. Its 3-pronged universal action plan when someone discloses rape or sexual assault is to (1) start by believing; (2) be supportive; and (3) ask how you can help. Stop by on Wednesday to meet your campus police officers, learn more, and take the pledge.

5. Wear your fave jeans to work on Denim Day
And finally, there’s Denim Day, which will be celebrated on April 24th. Denim Day is a 20 year tradition that originated after a ruling in the Italian Supreme Court that overturned a rape conviction because, the justices reasoned, the victim was wearing tight jeans and therefore must have helped her assailant remove them, thus indicating consent. The next day, the women in the Italian Parliament wore jeans to work in solidarity with the victim. Wearing jeans on Denim Day has since become a symbol of protest of the destructive attitudes about sexual harassment, abuse, assault and rape. Wear your favorite jeans on April 24th to show you support victims and reject the myths that surround sexual violence.

Making room for intentional awareness
The other day I heard a television pundit say, “80% of Americans want clean air and clean water,” during a panel discussion about climate change. Excuse me?!, I thought to myself, only eighty percent?? I immediately challenged the assertion because I find it impossible to believe that number is not 100%, one hundred percent! Everybody wants clean air and clean water. Don’t they? I tried to imagine a dissenter saying, “Nope, not me. I hate clean air and water. Yuk, no thank you!” But I couldn’t imagine it, there’s just no way I can believe such a person even exists.

I’m also quite certain I heard this remark out of context. I was in and out of the room and mostly distracted when I happened to overhear it. I’d be willing to bet that in its proper context, the comment made some sense and probably informed a broader topic. However, I’ll never know because I didn’t linger to hear more of the discussion and possibly gain understanding or insight because, well, I was busy.

This illustrates what it can feel like some days for social justice advocates, those on the front lines fighting for the dignity and rights of victims of sexual assault and other intimate partner abuses. You would think that everyone is fundamentally opposed to sexual assault–the 100%, if you will. Yet every day we hear accounts of victim blaming and other excuses used to justify the perpetration of sexual assault and harassment leading us to believe that everyone is not on the same page. At least not yet.

Part of DOVE Center’s mission is to “relentlessly pursue community education to increase bystander awareness and shift cultural norms.” We believe education is the primary key to unlocking solutions that will end intimate partner violence including sexual assault. But if we aren’t paying attention, or choose to hear only part of the message, or refuse to challenge our biases, we miss the bigger picture, that context that informs the broader topic. Approaching matters of sexual assault in this manner unintentionally contributes to toxic norms in our culture that tolerate bad behavior and worse, actual crimes of sexual violence. We understand the topic is hard to talk about, which is why so many just keep on walking, so to speak, and let the topic stay in the other room while they go about their business.

One in three women and one in four men will experience sexual violence in their lifetime. Nearly one in five women and one in 38 men have experienced attempted or completed rape in their lifetime. In Utah, one in eight women and one in 50 men will be raped in their lifetime. If we truly want to live in a healthy, thriving community, and enjoy meaningful, lasting, committed relationships, we can no longer afford to tune-in part way. We can no longer afford a victim-blaming mentality. We can do better to create a supportive culture for victims. Again, it starts with education. But we won’t get anywhere until each individual makes the personal commitment to believe victims, hold perpetrators accountable, explore opportunities for perpetrator treatment, and keep the conversation going. With our collective commitment, we can absolutely create change to the point that domestic and sexual violence no longer exist.

In the meantime, DOVE Center’s doors are open to provide supportive services to those who have been victimized by sexual assault and rape. You are not alone and we believe you.